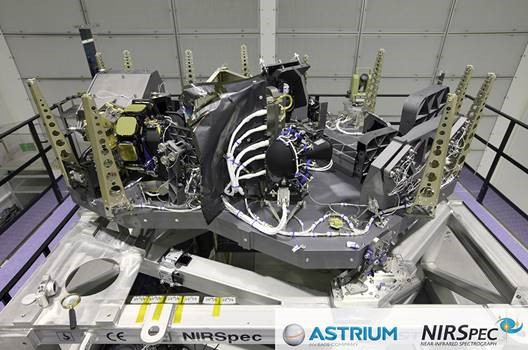 Consisting in four scientific instruments – near infrared camera NIRCam, near infrared spectrometer NIRSpec, mid-infrared instrument MIRI and near infrared imager and slitless spectrograph NIRISS, JWST will aim at observing stars, galaxies, planets and nebulas, to better understand the History of the Universe. Its objectives are:

As part of the development of the near infrared spectrograph, Winlight used its established expertise in optical surface polishing on complex geometries in order to carry out a delicate operation on NIRSpec instrument’s baseplate. Indeed, the silicon carbide baseplate of the  multi-object spectrograph NIRSpec was grinded by Winlight to get a very flat surface without grinding marks. This high-end instrument will provide spectroscopic surveys of very distant and ultra-faint galaxies, and of many compact sources.

Hubble space telescope’s worthy successor is now beginning a 29-day journey to reach its observation position, Lagrange point, located at nearly 1.5-milion kilometres from the Earth, opposite the Sun.

Such a journey represents a true technical achievement since the space observatory’s mirrors will deploy themselves into space and position at a few fractions of a micron on the 10th and 13th day after liftoff.