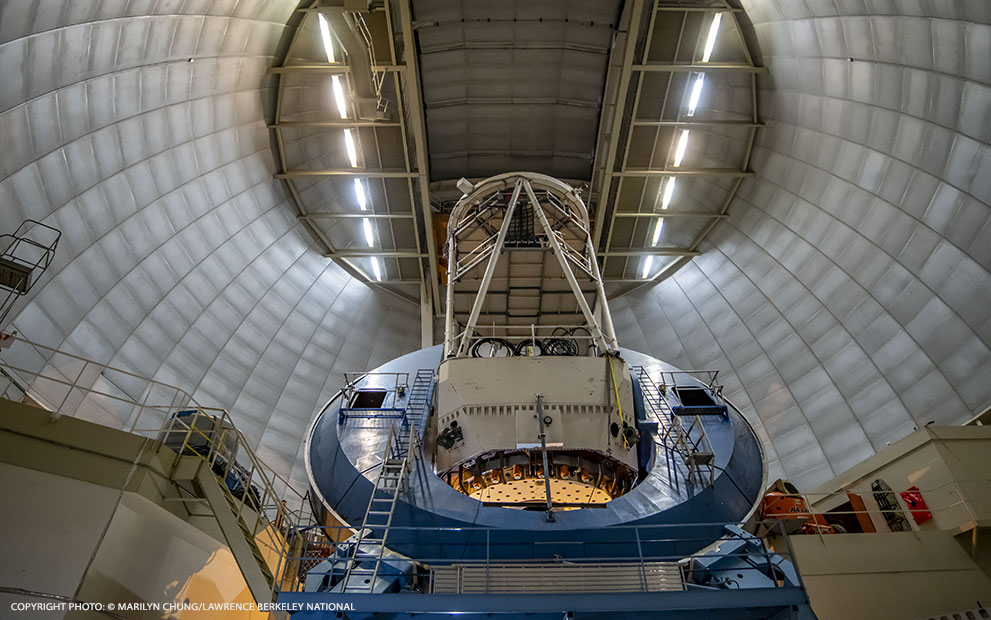 End of October 2019, the Dark Energy Spectroscopic Instrument (DESI) installed on the Mayall Telescope has trained its network of 5,000 optical fibre “eyes” to see its “first light”. DESI is currently undergoing a series of tests, before starting scientific observations in early 2020, during a 5-year mission.

Located at the Kitt Peak Observatory in Arizona (United-States), DESI will map the position of 35 million of galaxies and 2.4 million of quasars in order to detect light and measure their distance from Earth, up to 11-million light-years. Composed of 10 spectrographs, DESI is intended to map the History of the Universe for studying and understanding the properties of dark energy.

The realization of the spectrographs is the result of a fruitful collaboration between Berkeley Lab, the CEA, the French National Centre for Scientific Research (CNRS), the Aix-Marseille University and Winlight System, which has been entrusted with their design and development.

Initially requested to provide opto-mechanical sub-systems, Winlight System succeeded in convincing Berkeley to extend the scope of its service by joining forces with the CEA and CNRS and becoming prime contractor. Based in Pertuis, Vaucluse (France), Winlight System took charge of all integration tasks as well as the commissioning of the instrument, in order to reduce transportation and as unnecessary risks, as well as to improve responsiveness.

Thanks to the teams of Winlight System, the CEA and the CNRS, without whom the delivery deadlines, along with the performances of the spectrographs, would have been hard to meet.

The success of this “laboratory-industry” has allowed us all to contribute to this incredible realization.